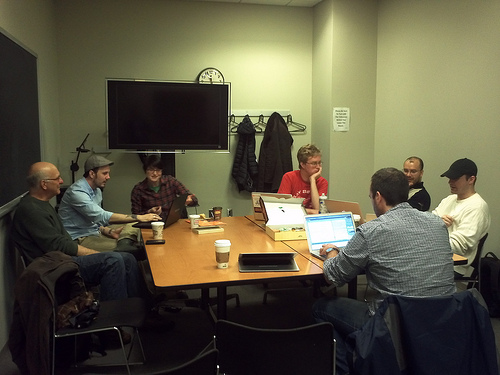 “Not to make it perfect, but more nearly right than wrong.”

A little over three years ago I had the very good fortune to interview with a couple of guys at CUNY who were working on this little project called the CUNY Academic Commons.  The job was something called a ‘Community Facilitator.’  I had no idea what that meant.  That was ok because it turned out they didn’t really either.  Before the interview was done Matt Gold and Boone Gorges explained to me that the job was, in many ways, whatever I wanted to make out of it – so long as it built a community and helped share the work of the Commons.

At the time we pretty much were the community.  There were a handful of early adopters, the Commons team, and everyone else had been thrown over a shoulder and carried here by a subcommittee member. Each new member or blog or group on the Commons was quietly celebrated and looked after in the same way you freeze when a particularly beautiful bird lands next to you on a bench.  You’re excited but you don’t want to be so excited you scare them off.   In an effort to build some sense of camaraderie on the site I started this errant little blog called ‘Footenotes.’  It was the first real ‘Community Facilitator’ thing I did for the site.  While I did a lot of things after it in my broadly defined role as a Community Facilitator, it’s been watching the community grow through reading for Footenotes each week that I’ve come to understand this place and what the Commons really is for CUNY.

But, alas, where does this awkward preamble lead us?

For the past three years I have been given the enormous privilege of working with this team.  The embarrassing wealth of talent and heart that runs the Commons has been an inspiration for me and instrumental in my growth.  Every single meeting has been filed with humor and big ideas and a tremendous sense of purpose, so much so that I made sure to travel to NYC from Boston once a month for two years to make sure I could share in the energy and passion of this group.  The Commons team as taught me how to think about what’s possible in the world and where to set the bar for how a person ought to approach any project they care about in their life.  With that in mind, I’ve been given an amazing opportunity to do work I’m very passionate about and will be leaving the Commons as Community Facilitator.  To be sure, I still look forward to being an active member of the site.  Many thanks to George Otte and the Sub-Committee who help steer the Commons.  My sincere gratitude to Matt Gold, Boone Gorges, Christ Stein, Scott Voth, Sarah Morgano, Michael Smith, Dominic Giglio, and Andre Pitanga.

And, of course, thank you for sharing so much with us here on the Commons.

Need help with the Commons? Visit our
help page Send us a message
Skip to toolbar

Built with WordPress Protected by Akismet Powered by CUNY